Two-valve arrangements for drum level control are usually specified for several reasons. One is financial 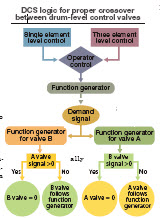 In two-valve arrangements, it is important that a smooth transition occur between the startup and the main drum-level valves that will protect both valves from low-flow damage. Programming of this transition is one of the most common problems facing operators of combined-cycle plants today

Perhaps the best two-valve setup is one where the smaller valve, the so-called startup valve, has sufficient cavitation protection for startup and is capable of handling about 20% of unit flow and the main valve is used for normal throttling control. The transition between the two valves follows what is referred to as the 80/20 rule. The capacity of the startup valve at 80% open should match that of the main valve at 20% open. Transfer between the two valves occurs when the startup valve is 80% open. At this time, the smaller valve closes and remains that way until the next startup. It is important that a smooth transition occur between the two valves to protect both from low flow damage. Programming of this transition is a problem faced by many operators of combined-cycle plants.

Another problem might be that the gain settings of the feedwater valves are tuned much too aggressively. This means that the valves will try to react to the slightest change in drum level, which can cause repeated on/off cycling of the valves. One example: at an Oklahoma four-on-one combined-cycle plant, the drum level valves were cycled on/off 35,000 times in less than six months. This repeated cycling caused premature wear of the shut-off and sealing areas of the valve.

Smooth transition in two-valve arrangements is critical to proper plant operation. There are several ways to tackle this problem, but the one that works best is to define a crossover range between the two valves. Rigid transition points work well, but only if the two valves are not continually fighting one another for control.

Experience has shown that during a typical startup using a rigid transition point, the two valves can switch between one another up to 20 times. This repeated operation exposes the valves to the potential for premature erosion.

The control diagram illustrates the DCS logic used to solve several feedwater control issues. This arrangement ensures that the two valves are not continually throttling back and forth between one another as plant load is increased. In this case, valve B is the startup valve and valve A the main valve. The function generators are set, depending on the capacity of both valves, to ensure a smooth transition between the two

Additional posts in this series:

Links for additional steps to take to improve your Critical Control Valve performance or for a copy of the control valve handbook. If you wish to discuss your leaking boiler feedwater valve issues, please contact us using the enquiry form or call Joe Walsh on +353 21 4510900 or Dave Ralph on +44 1633 877505