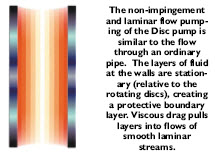 Discflo’s Disc Pump is based on a non-contact, non-impingement technology. The operating principle behind the Disc Pump is boundary layer-viscous drag. Its application to pumps commercially is new, but it has been used widely in fluid engineering for over 100 years. A common example of this principle is the phenomenon of pressure drop or friction losses through a pipe system.

Examination of the cross-section of a pipe under laminar (non-turbulent) flow conditions shows that layers of liquid travel at different velocities. The stationary pipe exerts a ‘drag’ force on the flowing liquid. The velocity of the layer adjacent to the pipe is zero, an effect known as the ‘boundary layer’. Successive layers flow increasingly fast with the highest velocities at the centre point between the pipe walls.

This is essentially the same boundary layer-viscous drag principle that is used by the Disc Pump. The pump ‘impeller’ comprises a series of parallel discs called the Discpac. As the discs rotate, they create drag and an initial boundary layer of fluid adheres to their surfaces as the flow enters the pump.

As the discs rotate, the boundary layer formed on the surfaces of the disc is stationary, relative to the discs. Similarly, the fluid travels increasingly fast toward the centre of the gap between the discs, relative to the discs. Kinetic energy is transferred through layers of fluid molecules between the discs, generating velocity and pressure gradients across the Discpac. This creates a powerful force that ‘pulls’ the product through the pump in a smooth, pulsation-free flow.

Because the system does not use pushing or impingement to move product through the pump, it has some compelling advantages over traditional impeller technologies and progressive cavity devices. This is especially true for handling difficult fluids such as: